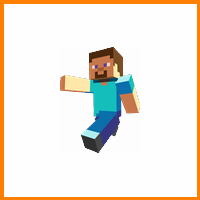 Pixel block game now-days getting popular among popular android gaming genres. The lure of 8 bit games and pixel powered retro game play seems to be as strong as ever. Call it nostalgia for the games of childhood or just a want to play something simple, pixel games are a hot seller on the Play store and treading strongly.  There are a lot of pixel-based games out there, so we sorted the top 10 available in the Play Store for the android are listed for you below. Read on:

1. Minecraft
Minecraft is a game about breaking and placing blocks. Primarily the players build structures to get themselves secure against nocturnal monsters, but as the game proceeds, players work collectively to generate incredible fanciful things. The game is a sort of adventure thing for adventure lovers. It is about building all those that is in your imagination; each and every type of construction and building is available in this sandbox game. It is not about building blocks, structures and building only; instead, you have to protect yourself against the external threats. As you will move further, it will become even more interesting and then you will be required to create even more amazing and imaginative things. Minecraft is basically a limitless game where there is no specific goal of the player except to accomplish the some tasks in the shape of construction

2. Terraria
Terraria is a sandbox and action-adventure game where you are required to survive for your life. Terraria is a multiplatform action and real-strategy game that is available for almost all PC, mobile operating systems and game consoles. This action and a strategical game that is about crafting, exploration, construction, and fighting with the variety of creators that are basically the enemy of yours. Terraria is essentially the 2D Unlike Minecraft, Terraria has a story and a point. You’ll craft things, mine things, engage in boss fights, and travel to various landscapes. It features 1250+ crafting recipes, about 15 pets, 15 bosses, and over a dozen environments for you to check out.

3. Block Story
Block Story is a mashup between Minecraft and an RPG. You play through a story, do quests, and level up your character. It also keeps many Minecraft elements like building, the graphics, and crafting. The story is infinite as you can continue questing in various maps and regions even after you’ve completed them to gain more resources to build more things. It’s a bit buggy here and there but the overall reception is generally positive.

4. The Blockheads
The Blockheads is a 2D/3D mix game that is a mix between your standard Minecraft and a platform game. The premise is you play as a Blockhead and you must create a shelter before nightfall so you don’t freeze to death. The platformer feeling is unique and jumping around collecting things has a bit of a different feeling than normal Minecraft-style experiences. It does still have the mining, crafting, and building of traditional Minecraft so the differences aren’t that big.

5. Guncrafter
Guncrafter takes the fun of building in Minecraft and and combines it with the undeniable popularity of firearms. In Guncrafter you use various materials to craft your own gun. Your creations will be more or less powerful based on your design choices and your material choices, You can then take that gun and match up against other players online to see whose gun can score more points. As you progress, you’ll get better materials and larger design options.

6. Pixel Gun 3D
Pixel Gun 3D (Minecraft style) – a pixel online shooter done in the style of the known game Minecraft. Now you have a fine opportunity to battle to your friends, schoolmates, colleagues or other people worldwide. In the game there’s a big variety of weapon, various locations (also from other games). There are some modes of game, including cooperative in which you need to shoot annoying zombies together with friends.

7. Delver
Delver is one of the higher rated games like Minecraft. It’s a first person dungeon crawler where you must fight monsters, collect loot and potions, and level up. It’s another game that puts an RPG spin on the Minecraft genre and it does so arguably better than pretty much anyone else. It doesn’t have most of the features of Minecraft like building or mining but the graphical style, sandbox elements, and general mechanics are similar. Plus, there’s a perma-death mode for those hardcore enough to play with only one life. There are also no in app purchases.

8. The Sandbox
The Sandbox is a highly popular sandbox and simulation game on iOS and it has done pretty well on Android as well. It features a very high number of possibilities in terms of scenery and game play. It keeps many of the Minecraft elements including crafting and full control over the landscape. It also borrows from games like Farmville in that you can also plant crops for resources instead of just mining for them. It’s a large game even if the graphics are a step backward from Minecraft.

9. SurvivalCraft
SurvivalCraft is one of the main games like Minecraft that people try because it has most of the same sort of game play elements and graphics. It expands on the core premise by adding things like marksmanship with bows and arrows. Other than a few expansions on ideas, the game is pretty much just like Minecraft. You can mine things, craft things, build things, and change things til your heart is content and there is even a free demo so you can try it before you buy it.

10. WorldCraft
WorldCraft is pretty much like Minecraft in every way but suffers from the pitfalls commonly associated with a game being totally free with no in app purchases. Despite being a tad underdeveloped, the game still manages to be fun. It includes features like online multiplayer, the ability to explore worlds created by other people, and most of the elements of Minecraft. It’s not amazing but it’s definitely worth checking out if you’re looking for a cheap alternative.

So which one is your favorite don't forget to mention :)
Android Entertainment Lists