Top 10 Longest runways in the World 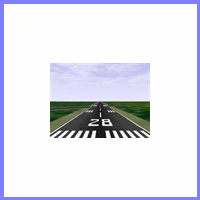 A runway is a defined rectangular area on a land aerodrome prepared for the landing and takeoff of aircraft. Runways are man made surface often asphalt, concrete, or a mixture of both. Although runway length may be of some academic interest, in terms of usability for airline operations, a runway of at least 6,000 ft (1,829 m) in length is usually adequate for aircraft weights below approximately 200,000 lb (90,718 kg). Large aircraft, primarily the wide-body aircraft will usually require at least 8,000 ft (2,438 m) at sea level and somewhat more at higher elevation airports. There are a lots of airport has larger runaway than the standard size. And here we list the top 10 longest runaways for you. Read on:

Top 10 Longest runways in the World

6. Shigatse Peace Airport (5,000m)
Xigazê Peace Airport is a dual-use military and civilian airport serving Xigazê, the second largest city in Tibet Autonomous Region, China. It is located in Jiangdang Township, 43 kilometers from Xigazê. Situated at an elevation of 3,782 metres (12,408 ft), it is one of the highest airports in the world. It's runaways length 5,000m/16,404ft.

8. Upington Airport (4,900m)
Upington Airport is an airport located in Upington, Northern Cape, South Africa. At 4900 metres, runway 17/35 is one of the longest runways in the world. The high elevation of the airport, extremely high summer temperatures and the fact that it was designed for the Boeing 747. It's runaways length 4,900m/16,076ft.

So what you think about this list, don't forget to mention :)