Top 10 Highest Statues in the World 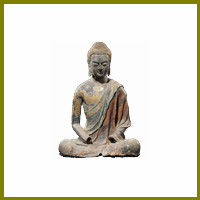 A statue is a sculpture representing one or more people or animals, normally full length, as opposed to a bust, and at least close to life-size, or larger. A small statue, usually small enough to be picked up, is called a statuette or figurine. The most impressive statues around the world stands for honoring great personalities and important events in the history. Some of them have enough heights to become main attraction of the city. The following is a list of the top 10 highest statues in the world, considering only the figure itself, without any pedestal or plinth included in the measurement and sorted by height of the statue. Read On:

Top 10 Highest Statues in the World 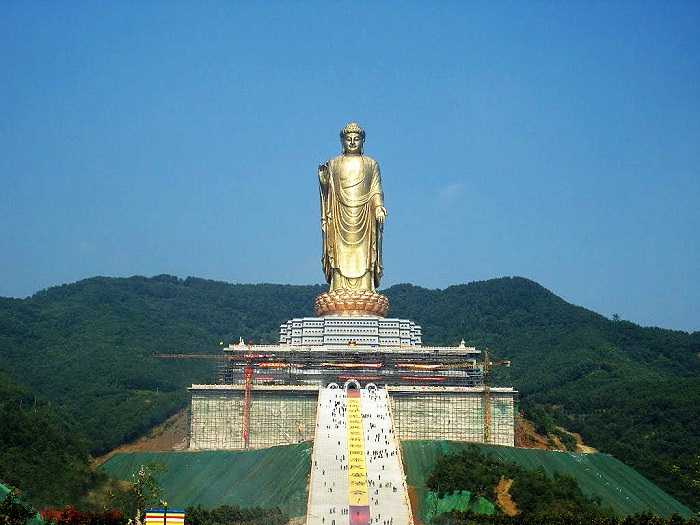 The Spring Temple Buddha is a statue depicting Vairocana Buddha located in the Zhaocun township of Lushan County, Henan, China, built from 1997 to 2008. It is located within the Fodushan Scenic Area, close to National Freeway no. 311. At 128 m (420 ft), not including a 20 m (66 ft) lotus pedestal, it is the tallest statue in the world. When the 25 m (82 ft) pedestal/building it is placed upon is taken into account, the monument has a total height of 153 m (502 ft). As of October 2008, the hill on which the statue stands is being reshaped to form two further pedestals, the upper one being 15 m tall. The total height of the monument is now said to be 208 m (682 ft). The project as a whole was estimated to cost around $55 million, $18 million of which being spent on the statue. It was originally estimated to consist of 1,100 pieces of copper cast, with a total weight of 1,000 tonnes. Beneath the statue is a Buddhist monastery. 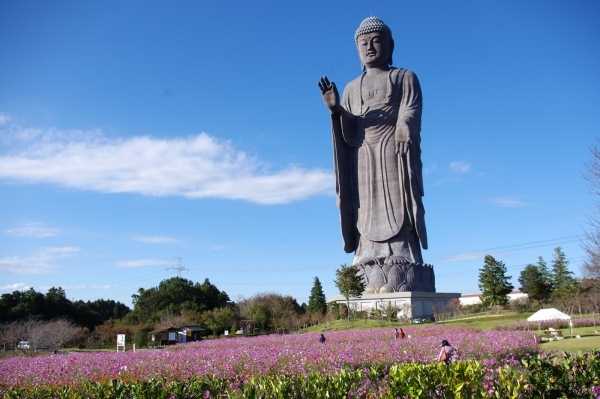 Ushiku Daibutsu is a statue located in Ushiku, Ibaraki Prefecture, Japan. Completed in 1993, it stands a total of 120 metres (390 ft) tall, including the 10 m (33 ft) base and 10m lotus platform. An elevator takes visitors up 85 m (279 ft) to an observation floor. The statue depicts Amitabha Buddha and is made of bronze. It is also known as Ushiku ARCADIA. It was built to commemorate the birth of Shinran, founder of the Jōdo Shinshū 浄土真宗 or "True Pure Land School" of Buddhism. Its Weight: 4,003 tonnes (8,825,000 lb. There are four different levels within the statue, visitors can reach the top by using the elevator. At first level visitors can hear beautiful music, the 2nd level completely dedicated for scriptural studies, third level filled with 30000 Buddha statues. From the top level visitors can watch the beautiful gardens within the surroundings of statue. 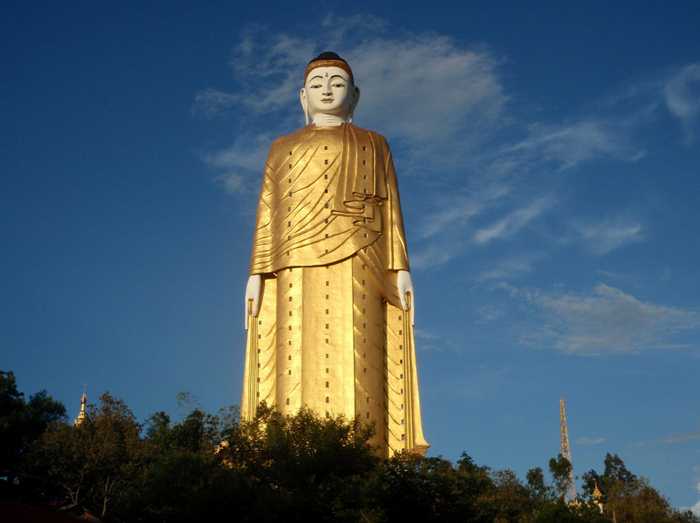 The Laykyun Sekkya Buddha is the third tallest statue in the world at 116 metres (381 ft). This statue of Gautama Buddha stands on a 13.5-metre (44 ft) throne located in the village of Khatakan Taung, near Monywa, Myanmar. Construction began in 1996 and it was completed on 21 February 2008. It was commissioned by the Chief Abbot Ven. Nãradã. There is also an elevator inside the statue for visitors to getting top for enjoying panoramic view of the city. Visitors can also see 89 meter lying Buddha next to Laykyun Setkyar statue. 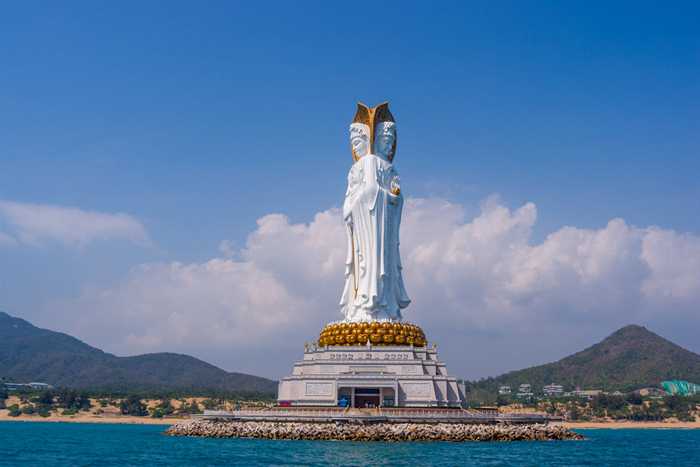 The Guanyin of the South Sea of Sanya is a 108-metre (354 ft) statue of the bodhisattva Avalokiteśvara , sited on the south coast of China's island province Hainan near the Nanshan Temple of Sanya. The statue has three aspects; one side faces inland and the other two face the South China Sea, to represent blessing and protection by Guanyin of China and the whole world. One aspect depicts Guanyin cradling a sutra in the left hand and gesturing the Vitarka Mudra with the right, the second with her palms crossed, holding a string of prayer beads, and the third holding a lotus. This is currently the fourth tallest statue in the world and the tallest statue of Guanyin in the world.  The statue took six years to build and was enshrined on April 24, 2005, with the participation of 108 eminent monks from various Buddhist groups in Taiwan, Hong Kong, Macao and Mainland China, and tens of thousands of pilgrims. The delegation also included monks from the Theravada and Vajrayana traditions. 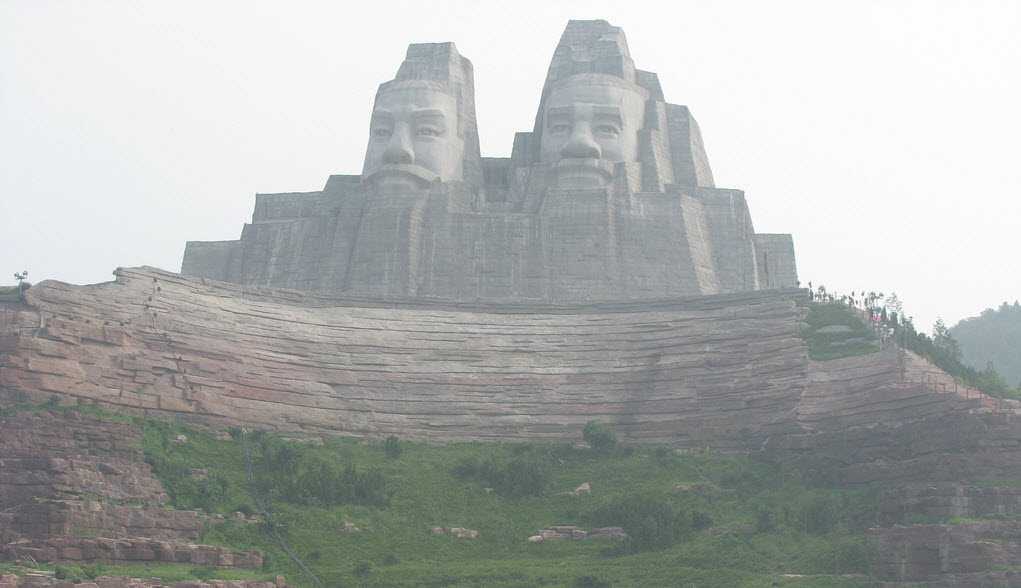 The sculptures of the Emperors Yan and Huang are the fifth tallest statues in the world at 106 meters. They depict two of the earliest Chinese emperors, Yan Di and Huang Di. The construction lasted 20 years and was completed in 2007. They are located in Zhengzhou, the capital of Henan province, People's Republic of China. According to experts, the statues commemorate politics and the economy. Government spent $22.5 million for the construction of these statues. The eyes of these statues are 3 meters wide and nose have length of 6 meter. 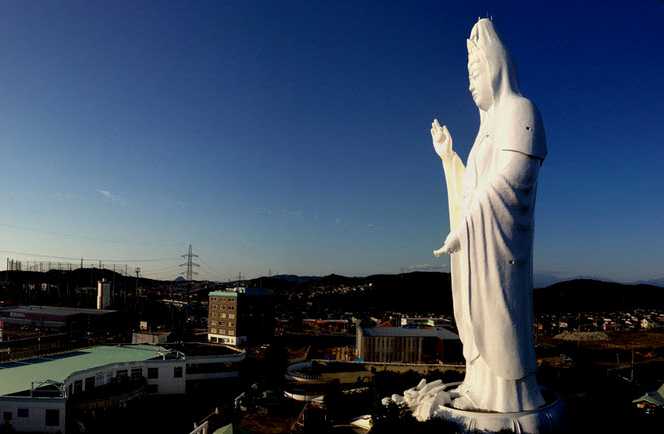 Sendai Daikannon, located in Sendai, Japan, is the sixth tallest statue in the world at 100 meters (328 feet). An elevator takes tourists to the top of the statue, which depicts the Japanese Buddhist Bodhisattva Kannon. Sendai Daikannon holding a jewel within it’s right hand and a water hand in left hand, to our the water of wisdom. Through the elevators tourist can reach at the top of the statue and can view entire city.

7. Guishan Guanyin of the Thousand Hands and Eyes (99 meters) 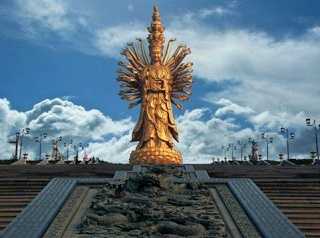 Guishan Guanyin of the Thousand Hands and Eyes is the fourth tallest statue in China, and the seventh tallest in the world. This gilded bronze monument depicting Avalokitesvara stands 99 m (325 ft) tall, and is located in Weishan, Changsha, Hunan, People's Republic of China. The Ningshan County Government, with the help of local business and religious organizations, invested 260 million yuan to complete its construction in 2009. 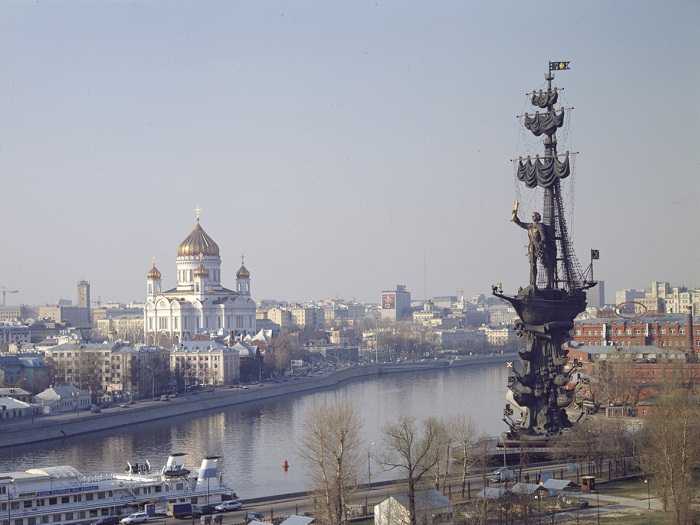 The Peter the Great Statue is a 98 meter high monument to Peter the Great, located at the western confluence of the Moskva River and the Vodootvodny Canal in central Moscow. It was designed by the Georgian designer Zurab Tsereteli to commemorate 300 years of the Russian Navy, which Peter the Great established. It was erected in 1997 and is the eighth tallest statue in the world. It weighs around 1,000 tons and contains 600 tons of stainless steel, bronze and copper. 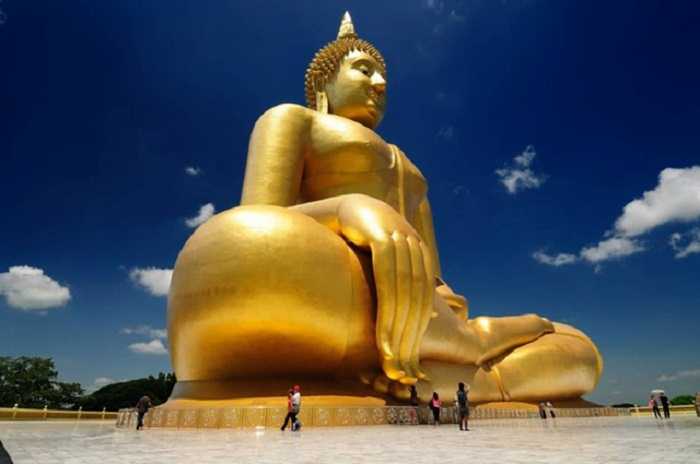 The Great Buddha of Thailand, also known as The Big Buddha, The Big Buddha of Thailand, Phra Buddha Maha Nawamin, and Mahaminh Sakayamunee Visejchaicharn, is the tallest statue in Thailand, and the ninth tallest in the world.  Located in the Wat Muang Monastery in Ang Thong province, this statue stands 92 m (300 ft) high, and is 63 m (210 ft) wide. Construction commenced in 1990, and was completed in 2008. It is painted gold and made of concrete. 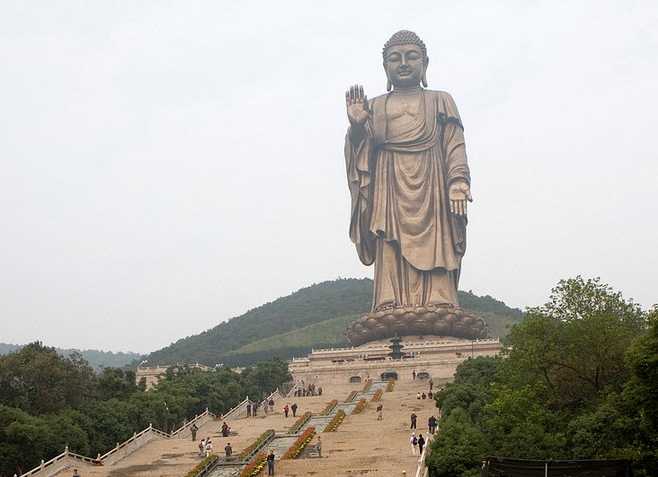 The Grand Buddha is located at the south of the Longshan Mountain, near Mashan, town of Wuxi, Jiangsu Province, People's Republic of China. It is one of the largest Buddha statues in China and also in the world.  At more than 88 metres high, the Grand Buddha at Ling Shan is a bronze Amitabha standing Buddha outdoor, weighing over 700 tons. It was completed in the end of 1996.  In 2008, a "Five-signets" Palace and a Brahma Palace were built south-east of the grand buddha statue.

So what you think about this list; don't forget to mention :)
Architecture Highest Lists