Top 10 Highest Mountain in the World 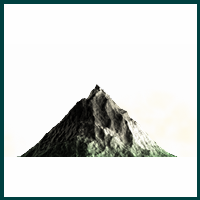 Mountain is a large land form that stretches above the surrounding land in a limited area, usually in the form of a peak. Mountains are formed through tectonic forces or volcanism. These forces can locally raise the surface of the earth. Mountains erode slowly through the action of rivers, weather conditions, and glaciers. A few mountains are isolated summits, but most occur in huge mountain ranges.  High elevations on mountains produce colder climates than at sea level. The highest mountain on Earth is Mount Everest in the Himalayas of Asia, whose summit is 8,850 m (29,035 ft) above mean sea level. Let's see Top 10 Highest Mountain in the World. Read on:

Top 10 Highest Mountain in the World 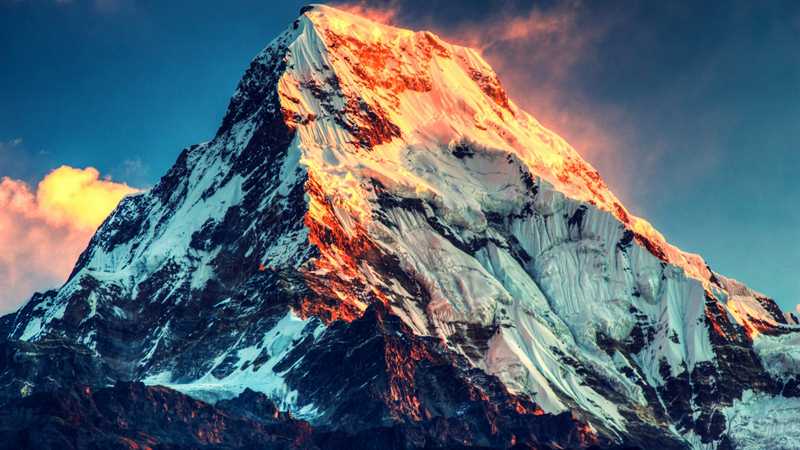 The Mount Everest, also known in Nepal as Sagarmāthā and in Tibet as Chomolungma, is Earth's highest mountain. It is located in the Mahalangur mountain range in Nepal and Tibet. Its peak is 8,848 metres (29,029 ft) above sea level. The international border between China (Tibet Autonomous Region) and Nepal runs across Everest's precise summit point. In 1856, the Great Trigonometrical Survey of India established the first published height of Everest, then known as Peak XV, at 8,840 m (29,002 ft). The current official height of 8,848 m (29,029 ft) as recognized by China and Nepal was established by a 1955 Indian survey and subsequently confirmed by a Chinese survey in 1975. In 1865, Everest was given its official English name by the Royal Geographical Society upon a recommendation by Andrew Waugh, the British Surveyor General of India. Waugh named the mountain after his predecessor in the post, Sir George Everest, arguing that there were many local names, against the opinion of Everest. After years of dreaming about it and seven weeks of climbing, New Zealander Edmund Hillary and Nepalese Tenzing Norgay reached the top of Mount Everest, the highest mountain in the world, at 11:30 a.m. on May 29, 1953. They were the first people to ever reach the summit of Mount Everest. 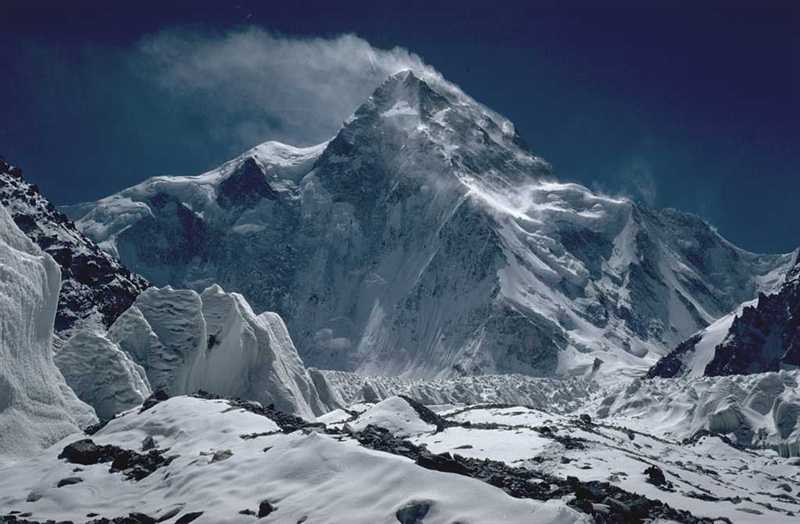 The K2, also known as Chhogori/Qogir, Ketu/Kechu, and Mount Godwin-Austen is the second highest mountain in the world, after Mount Everest, at 8,611 metres (28,251 ft) above sea level. It is located on the China-Pakistan border between Baltistan, in the Gilgit–Baltistan region of northern Pakistan, and the Taxkorgan Tajik Autonomous County of Xinjiang, China. K2 is the highest point of the Karakoram range and the highest point in Pakistan. K2 is known as the Savage Mountain due to the extreme difficulty of ascent. It has the second-highest fatality rate among the eight thousanders. With around 300 successful summits and 80 fatalities, about one person dies on the mountain for every four who summit. The name K2 is derived from the notation used by the Great Trigonometric Survey of British India. Thomas Montgomerie made the first survey of the Karakoram from Mount Haramukh, some 210 km (130 miles) to the south, and sketched the two most prominent peaks, labeling them K1 and K2. An Italian expedition finally succeeded in ascending to the summit of K2 via the Abruzzi Spur on 31 July 1954. The expedition was led by Ardito Desio, 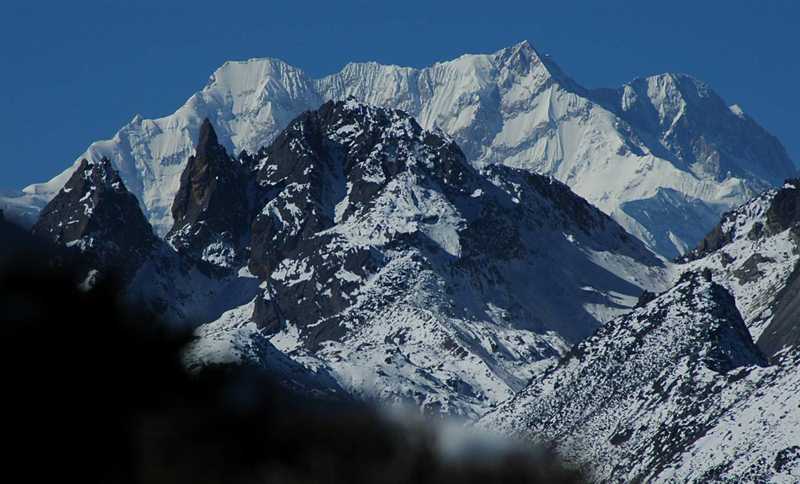 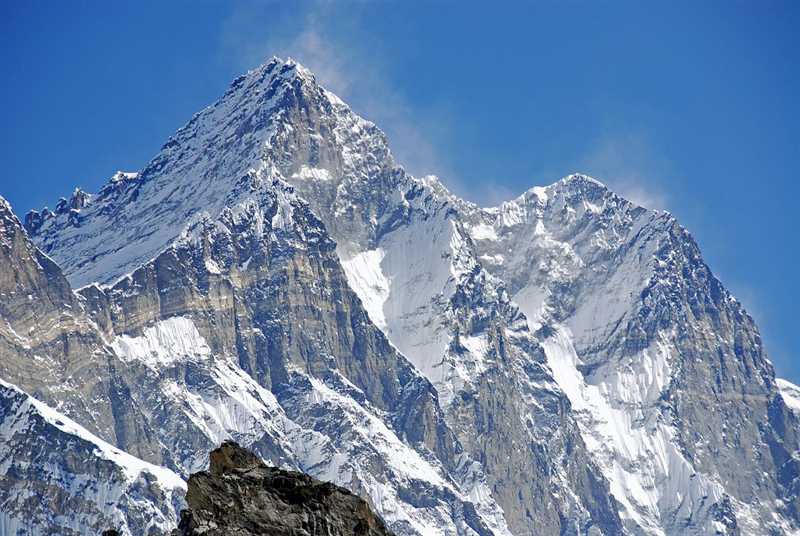 The Lhotse is the fourth highest mountain in the world at 8,516 metres (27,940 ft), after Mount Everest, K2, and Kangchenjunga. Part of the Everest massif, Lhotse is connected to the latter peak via the South Col. Lhotse means “South Peak” in Tibetan. In addition to the main summit at 8,516 metres (27,940 ft) above sea level, the mountain comprises the smaller peaks Lhotse Middle (East) at 8,414 m (27,605 ft), and Lhotse Shar at 8,383 m (27,503 ft). The summit is on the border between Tibet (China) and the Khumbu region of Nepal. First ascent was in May 18, 1956 Fritz Luchsinger, Ernst Reiss (First winter ascent 31 December 1988 Krzysztof Wielicki). The western flank of Lhotse is known as the Lhotse Face. Any climber bound for the South Col on Everest must climb this 1,125 m (3,690 ft) wall of glacial blue ice. This face rises at 40 and 50 degree pitches with the occasional 80 degree bulges. 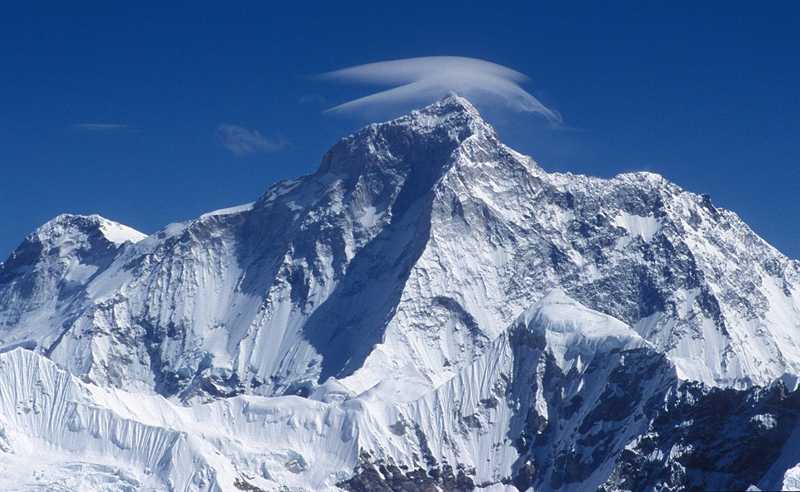 The Makalu is the fifth highest mountain in the world at 8,485 metres (27,838 ft). It is located in the Mahalangur Himalayas 19 km (12 mi) southeast of Mount Everest, on the border between Nepal and China. One of the eight-thousanders, Makalu is an isolated peak whose shape is a four-sided pyramid.  Makalu has two notable subsidiary peaks. Kangchungtse, or Makalu II (7,678 m) lies about 3 km (2 mi) north-northwest of the main summit. Rising about 5 km (3.1 mi) north-northeast of the main summit across a broad plateau, and connected to Kangchungtse by a narrow, 7,200 m saddle, is Chomo Lonzo (7,804 m). Makalu was first climbed on May 15, 1955 by Lionel Terray and Jean Couzy of a French expedition led by Jean Franco. Franco, G. Magnone and Sardar Gyaltsen Norbu summitted the next day, followed by Bouvier, S. Coupe, Leroux and A Vialatte on the 17th. 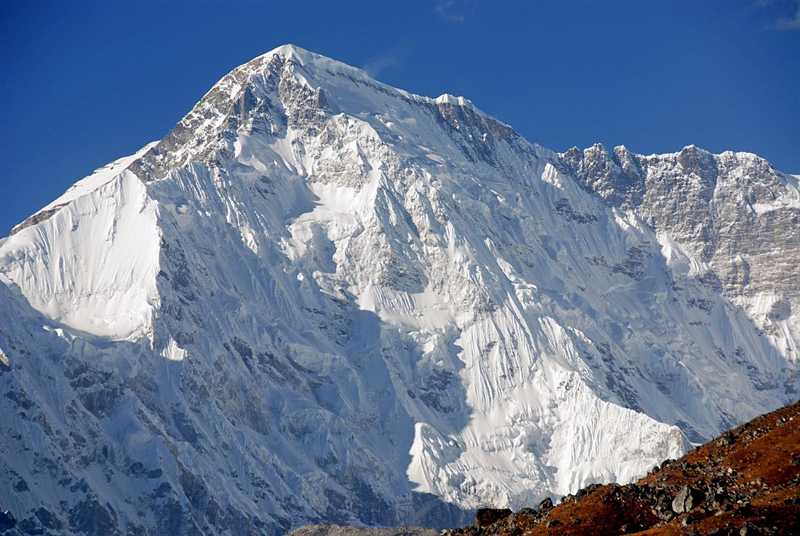 The Cho Oyu is the sixth highest mountain in the world at 8,201 metres (26,906 ft) above sea level. Cho Oyu means "Turquoise Goddess" in Tibetan. The mountain is the westernmost major peak of the Khumbu sub-section of the Mahalangur Himalaya 20 km west of Mount Everest. The mountain stands on the China-Nepal border. The mountain was first climbed on October 19, 1954, via the north-west ridge by Herbert Tichy, Joseph Jöchler and Sherpa Pasang Dawa Lama of an Austrian expedition. Cho Oyu was the fifth 8000 metre peak to be climbed, after Annapurna in June 1950, Mount Everest in May 1953, Nanga Parbat in July 1953 and K2 in July 1954. 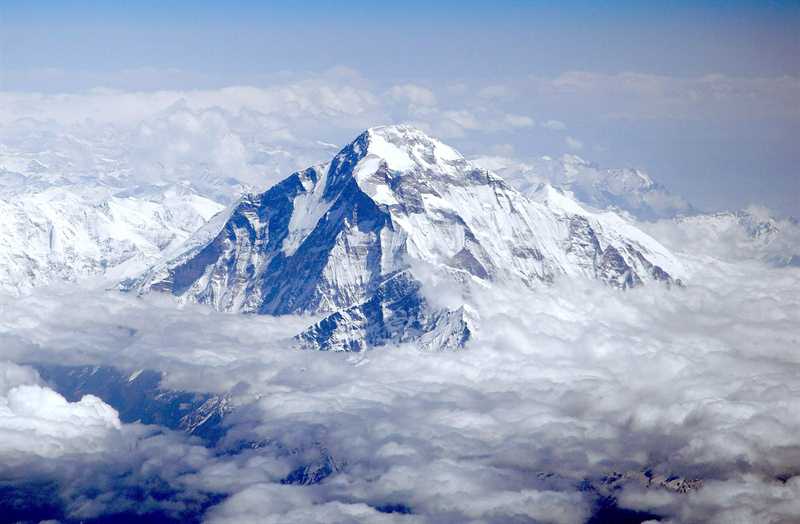 The Dhaulagiri massif in Nepal extends 120 km (70 mi) from the Kaligandaki River west to the Bheri. This massif is bounded on the north and southwest by tributaries of the Bheri River and on the southeast by Myagdi Khola. Looking north from the plains of India, most 8,000-metre peaks are obscured by nearer mountains. Dhaulagiri I is the seventh highest mountain in the world at 8,167 metres (26,795 ft) above sea level. It was first climbed on May 13, 1960 by a Swiss/Austrian/Nepali expedition Kurt Diemberger, A. Schelbert, E. Forrer, Nawang Dorje, Nyima Dorje (First winter ascent 21 January 1985 Jerzy Kukuczka and Andrzej Czok). 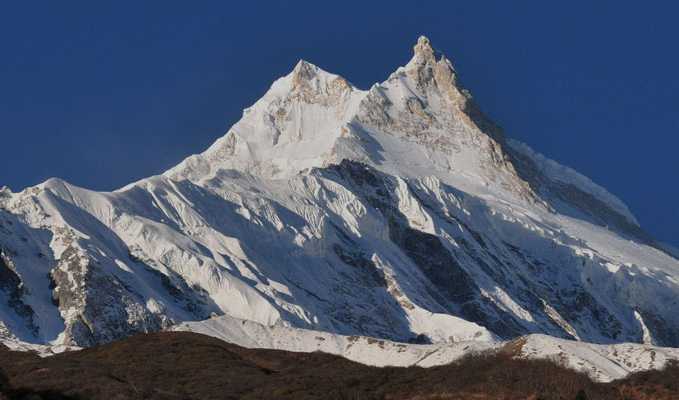 The Manaslu is the eighth highest mountain in the world at 8,163 metres (26,781 ft) above sea level. It is located in the Mansiri Himal, part of the Nepalese Himalayas, in the west-central part of Nepal. Its name, which means "mountain of the spirit", comes from the Sanskrit word manasa, meaning "intellect" or "soul". Manaslu was first climbed on May 9, 1956 by Toshio Imanishi and Gyalzen Norbu, members of a Japanese expedition. It is said that "just as the British consider Everest their mountain, Manaslu has always been a Japanese mountain". Manaslu at 8,156 metres (26,759 ft) above mean sea level  is the highest peak in the Lamjung District and is located about forty miles east of Annapurna. The mountain's long ridges and valley glaciers offer feasible approaches from all directions. 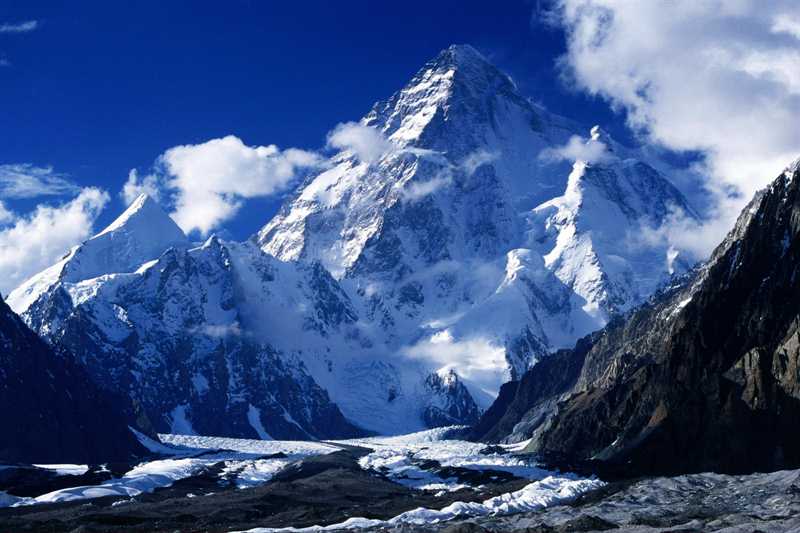 The Nanga Parbat is the ninth highest mountain in the world at 8,126 metres (26,660 ft) above sea level. It is the western anchor of the Himalayas around which the Indus river skirts into the plains of Pakistan. It is located in the Gilgit-Baltistan region of the Pakistan and is locally known as 'Deo Mir'. Nanga Parbat is one of the eight-thousanders, with a summit elevation of 8,126 metres (26,660 ft).[3] An immense, dramatic peak rising far above its surrounding terrain, Nanga Parbat is also a notoriously difficult climb. Numerous mountaineering deaths in the mid and early 20th century lent it the nickname "killer mountain". Nanga Parbat was first climbed, via the Rakhiot Flank (East Ridge), on July 3, 1953 by Austrian climber Hermann Buhl, a member of a German-Austrian team. 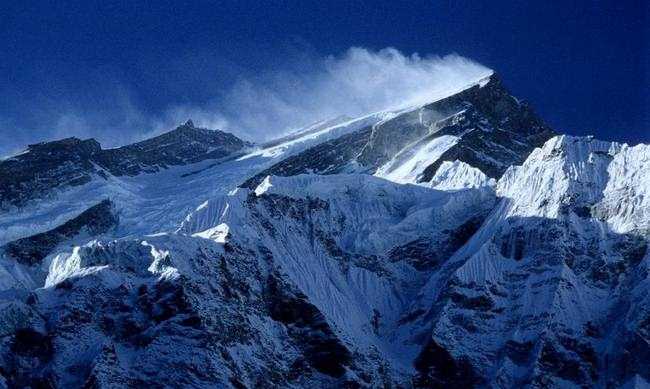 The Annapurna I is a mountain and part of the Annapurna massif in the Himalayas in north-central Nepal that includes one peak over 8,000 metres (26,000 ft), thirteen peaks over 7,000 metres (23,000 ft), and sixteen more over 6,000 metres (20,000 ft). The massif is 55 kilometres (34 mi) long, and is bounded by the Kali Gandaki Gorge on the west, the Marshyangdi River on the north and east, and by Pokhara Valley on the south. At the western end the massif encloses a high basin called the Annapurna Sanctuary. Annapurna I Main is the tenth highest mountain in the world at 8,091 metres (26,545 ft) above sea level. Annapurna peaks are among the world's most dangerous mountains to climb, although in more recent history, using only figures from 1990 and after, Kangchenjunga has a higher fatality rate. First ascent was in 3 June 1950 Maurice Herzog and Louis Lachenal.

So what you think about this list, don't forget to mention :)
Highest Lists Nature