Top 10 Heaviest Animal in the World 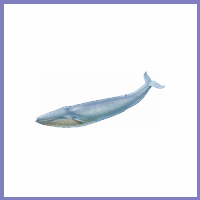 A member of the order Cetacea, the blue whale, is thought to be the largest animal ever to have lived. The maximum recorded weight was 190 metric tonnes for a specimen measuring 30 metres (98 ft), whereas longer ones, up to 33.4 metres (110 ft), have been recorded but not weighed. The African bush elephant, of the order Proboscidea, is the largest living land animal. A native of various open habitats in sub-Saharan Africa, this elephant is born commonly weighing about 100 kilograms (220 lb). The largest elephant ever recorded was shot in Angola in 1974. It was a male measuring 10.7 metres (35 ft) from trunk to tail and 4.17 metres (13.7 ft) lying on its side in a projected line from the highest point of the shoulder to the base of the forefoot, indicating a standing shoulder height of 3.96 metres (13.0 ft). The heaviest living animals are all cetaceans, and thus also the largest living mammals.So let's see which are the top 10 Heaviest Animal in the World, Read on:

Top 10 Heaviest Animal in the World

The blue whale (Balaenoptera musculus) is a marine mammal belonging to the baleen whales (Mysticeti). At 30 metres (98 ft) in length and up to 170 tonnes (190 short tons) in weight, it is the largest extant animal and is the heaviest known to have existed. Blue whales are difficult to weigh because of their size. As a whole, blue whales from the Northern Atlantic and Pacific appear to be smaller on average than those from sub-Antarctic waters. Adult weights typically range from 73–136 tonnes (80–150 short tons). There is some uncertainty about the biggest blue whale ever found, as most data came from blue whales killed in Antarctic waters during the first half of the twentieth century, which were collected by whalers not well-versed in standard zoological measurement techniques. The heaviest weight ever reported was 170 metric tons (190 short tons) for a southern hemisphere female in 1947. The longest whales ever recorded were two females measuring 33.6 and 33.3 metres (110 and 109 ft).

The fin whale (Balaenoptera physalus), also called the finback whale, razorback, or common rorqual, is a marine mammal belonging to the suborder of baleen whales. It is the second largest animal after the blue whale, the largest growing to 27.3 m (89.6 ft) long and weighing nearly 74 tonnes (73 long tons; 82 short tons). The fin whale's body is long and slender, coloured brownish grey with a paler underside. At least two recognized subspecies exist, in the North Atlantic and the Southern Hemisphere. It is found in all the major oceans, from polar to tropical waters. It is absent only from waters close to the ice pack at the poles and relatively small areas of water away from the open ocean. The highest population density occurs in temperate and cool waters. Its food consists of small schooling fish, squid, and crustaceans including copepods and krill. The largest fin whale ever weighed (piecemeal) was a 22.7 m (74.5 ft) pregnant female caught by Japanese whalers in the Antarctic in 1948 which weighed 69.5 tonnes (68.4 long tons; 76.6 short tons), minus 6% for loss of fluids during the flensing process. An individual over 27 m (88.6 ft) is estimated to weigh in excess of 120 tonnes. 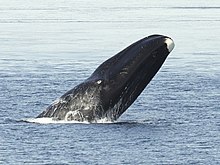 The bowhead whale (Balaena mysticetus) is a species of the right whale family Balaenidae, in suborder Mysticeti, and genus Balaena. A stocky dark-colored whale without a dorsal fin, it can grow 14 m (46 ft) to 18 m (59 ft) in length. This thick-bodied species can weight from 75 tonnes (74 long tons; 83 short tons) to 100 tonnes (98 long tons; 110 short tons) They live entirely in fertile Arctic and sub-Arctic waters, unlike other whales that migrate to low latitude waters to feed or reproduce. The bowhead was also known as the Greenland right whale or Arctic whale. American whalemen called them the steeple-top, polar whale, or Russia or Russian whale. The bowhead has the largest mouth of any animal. Bowhead whales are known to be the longest-living mammals, living for over 200 years. 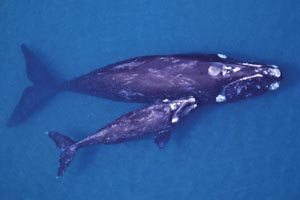 The North Atlantic right whale (Eubalaena glacialis, which means "good, or true, whale of the ice") is a baleen whale, one of three right whale species belonging to the genus Eubalaena,  all of which were formerly classified as a single species. Because of their docile nature, their slow surface-skimming feeding behaviors, their tendencies to stay close to the coast, Adult North Atlantic right whales average 13–16 m (43–52 ft) in length and weigh approximately 40,000 to 70,000 kg (44 to 77 short tons), they are slightly smaller on average than the North Pacific species. The largest measured specimens have been 18.5 m (61 ft) long and 106,000 kg . Females are larger than males.  Forty percent of a right whale's body weight is blubber, which is of relatively low density. Consequently, unlike many other species of whale, dead right whales float. 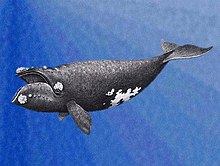 The southern right whale (Eubalaena australis) is a baleen whale, one of three species classified as right whales belonging to the genus Eubalaena. Like other right whales, the southern right whale is readily distinguished from others by the callosities on its head, a broad back without a dorsal fin, and a long arching mouth that begins above the eye. Its skin is very dark grey or black, occasionally with some white patches on the belly. The right whale's callosities appear white due to large colonies of cyamids (whale lice). It is almost indistinguishable from the closely related North Atlantic and the North Pacific right whales, displaying only minor skull differences. The size of an adult female is 15 m (49 ft) and can weigh up to 47 tonnes (46 long tons; 52 short tons), with the larger records of 17.5–18 m (57–59 ft) in length and 80 tonnes (79 long tons; 88 short tons) or up to 90 tonnes (89 long tons; 99 short tons) in weight, making them slightly smaller than other right whales in Northern Hemisphere.

The sperm whale (Physeter macrocephalus), or cachalot, is the largest of the toothed whales and the largest toothed predator. It is the only living member of genus Physeter, and one of three extant species in the sperm whale family, along with the pygmy sperm whale and dwarf sperm whale of the genus Kogia.  Mature males average 16 metres (52 ft) in length but some may reach 20.5 metres (67 ft), with the head representing up to one-third of the animal's length. Plunging to 2,250 metres (7,382 ft), it is the second deepest diving mammal, following only the Cuvier's beaked whale. The sperm whale's clicking vocalization, a form of echolocation and communication, may be as loud as 230 decibels underwater. It has the largest brain of any animal on Earth, more than five times heavier than a human's. Sperm whales can live for more than 60 years. Extensive whaling may have decreased their size, as males were highly sought, primarily after World War II. Today, males do not usually exceed 18.3 metres (60 ft) in length or 51,000 kilograms (50 long tons; 56 short tons) in weight. 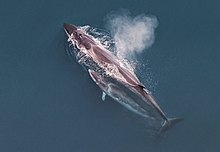 The sei whale Balaenoptera borealis, is a baleen whale, the third-largest rorqual after the blue whale and the fin whale. It inhabits most oceans and adjoining seas, and prefers deep offshore waters. It avoids polar and tropical waters and semi-enclosed bodies of water. Reaching 19.5 metres (64 ft) long and weigh as much as 100,000 pounds, while female whales generally grow to be a bit larger than their male counterparts., the sei whale consumes an average of 900 kilograms (2,000 lb) of food every day; its diet consists primarily of copepods, krill, and other zooplankton. It is among the fastest of all cetaceans, and can reach speeds of up to 50 kilometres per hour (31 mph) (27 knots) over short distances. The whale's name comes from the Norwegian word for pollock, a fish that appears off the coast of Norway at the same time of the year as the sei whale.

The humpback whale (Megaptera novaeangliae) is a species of baleen whale. One of the larger rorqual species, adults range in length from 12–16 m (39–52 ft) and weigh about 36,000 kg (79,000 lb). The humpback has a distinctive body shape, with long pectoral fins and a knobbly head. It is known for breaching and other distinctive surface behaviors, making it popular with whale watchers. Fully grown males average 13–14 m (43-46 ft). Females are slightly larger at 15–16 m (49-52 ft); one large recorded specimen was 19 m (62 ft) long and had pectoral fins measuring 6 m (20 ft) each. The largest humpback on record, according to whaling records, was a female killed in the Caribbean; she was 27m (89 ft) long with a weight of 90 metric tons (99 short tons), although the reliability of this information is unconfirmed due to illogicality of the record.  Body mass typically is in the range of 25–30 metric tons (28–33 short tons), with large specimens weighing over 40 metric tons (44 short tons).

The gray whale (Eschrichtius robustus) is a baleen whale that migrates between feeding and breeding grounds yearly. It reaches a length of 14.9 meters (49 ft), a weight of 36 tonnes (40 short tons), and lives between 55 and 70 years. The common name of the whale comes from the gray patches and white mottling on its dark skin. Gray whales were once called devil fish because of their fighting behavior when hunted. The gray whale is the sole living species in the genus Eschrichtius, which in turn is the sole living genus in the family Eschrichtiidae. This mammal descended from filter-feeding whales that developed at the beginning of the Oligocene, over 30 million years ago.

So what you think about this list, don't forget to mention :)
Heaviest Lists Nature